How to Remove Smoke Smell From Cars: 9 Methods + Tips!

Finding yourself in a smelly car that you can't seem to get the smell out of? Cigarette and Pipe smoke can infiltrate the interior of just about any car. Here are the best ways to get rid of this smelly problem. 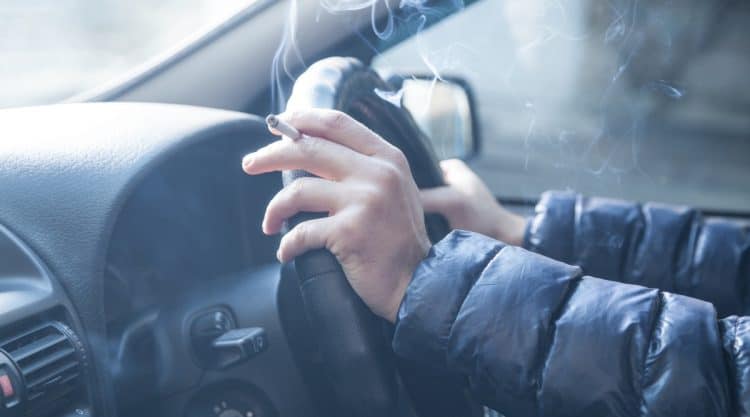 The number of smokers is decreasing year after year, especially in the younger generations. This is very positive, and I know that you agree with me on this one – even if you’re a smoker yourself who hasn’t managed to kick that habit just yet.

Smoking today is not as ‘cool’ as it used to be back in the 50s and 60s. If you’ve watched old movies, you’ll know what I mean.

Everyone was smoking everywhere back then, but that’s not the case nowadays, as people have become much more aware of all the negative health repercussions associated with smoking.

Some of us, though, still choose to enjoy a cigarette once in a while, especially in our cars.

Whether you choose to smoke a cigarette in your car or it’s your passengers doing the puffing, one thing’s for sure: you’ll want to do something about that nasty smell sooner rather than later.

If you don’t do this often enough, your car will soon reek like a used ashtray!

Why Is It So Hard to Remove Smoke Smell From a Car?

Cigarettes are made up of about 600 ingredients, and when burned they produce 7,000 toxins.

There are two main reasons why removing smoke smell from cars is so hard.

First of all, these toxins cling to any surface they come in contact with, acting like a coating.

Secondly, tobacco smoke combines with the moist breath exhaled from the smoker, so it becomes damp. This adds to the clinging power of the vapors.

It gets worse, though. The more you smoke in a small space like a car, the more you add layer upon layer of toxins. They attach themselves to any available surface, making it even harder to remove the smell.

As we’ll be seeing in just a moment, the problem is not only the smell, though – as unpleasant as it is.

Why Should I Remove Smoke Smell From My Car?

The most obvious reason is that the lingering odor is unpleasant.

If the driver is a smoker, they may not notice it themselves, and will likely not be all that much bothered by it. However, passengers surely will.

As we’ve mentioned, however, the reason to remove the odor isn’t only the smell itself. There’s a more important reason, as far as we’re concerned at least.

Being exposed to even the smell of smoke has negative consequences for our health. A recently studied phenomenon, called third-hand smoke, is thought to be just as dangerous as second-hand or passive smoking.

It poses even greater threats for children and babies, which is a huge problem for anyone with a family or pets at home.

Let’s look at what happens:

How To Remove the Smell of Smoke From a Car

There are some basic steps needed to get rid of the smoke smell in your car.

For starters, each and every single inch of the car interior needs to be meticulously detailed for the best possible results.

For lasting results, it’s better to repeat the entire cleaning process at least two times. This depends on how severe the odors are in the first place, though.

The steps are as follows: (Note that these do not change, even if the cleaning methods and products used may vary)

Which Products Should I Use When Getting Rid of Smoke Smell From My Car?

There are three main categories of products to choose from when attempting to eliminate smoke odors from your car. These include DIY methods, chemical products and ozone generators.

We’ll now explain each category on its own, and examine its pros and cons so that you can know which is best to use in your case.

The do-it-yourself (DIY) way usually involves natural cleaning products. They generally don’t have chemicals, and are therefore safer for our health and our environment:

Clean all hard surfaces, including windows and seat belts, with a mixture of equal parts of vinegar and warm water. Vinegar is both a sanitizer and a deodorant.

It absorbs odors and can be used to remove smoke smells from car seats and carpets.

Make sure surfaces are dry, and then sprinkle baking soda on them and leave for a few hours. The longer you can leave it on, the better. Finally, vacuum to remove.

Just in case you’re worried about your car’s interior and whether or not baking soda will cause any damage to it, it’s worth mentioning that baking soda is safe on leather upholstery.

Place a bowl of charcoal in your car and leave it overnight. The longer it is left to work its magic, the better.

Charcoal absorbs odors, and you can still use it for a barbeque afterward!

You can either place an open container with coffee grounds, or make little sachets to hang in your car. These can be made by cutting some socks or stockings.

Coffee has such a strong odor, that it will absorb the smoke smell and replace it with its intense scent. This method is perfect for coffee lovers!

If you happen to be a cat owner, you’ll surely have some cat litter in the house to use for this purpose.

Place an open container full of car litter in the car, and watch it do its magic in time.

Place some fresh citrus fruit peels in the car and leave them until they are dry. These might be from oranges or lemons, for example. They will leave behind a pleasant scent in your car.

So, what are the cons of using natural, DIY products to remove the smell of smoke from vehicles?

While they are environmentally safe, these remedies only work temporarily. If you’re looking for a long term fix, you’ll need to resort to other measures.

With natural and DIY products, the lingering smell of stale cigarettes is tough to eliminate completely, especially if you continue smoking in your car after you do all this work.

Chemical Products are what many of us use on a daily basis to clean our homes, whether we realize it or not.

There are a variety of cleaning products, sanitizers or deodorants to choose from. Some of the most common ones are: Lysol, OxiClean, Windex, Clorox, and so on.

Everyone has their favorites, and there’s nothing wrong with having personal preferences because of past experiences. So what will you need to remove the smoke smell from your car?

However, many would argue that they are still safer than the dangers of exposure to third-hand smoke.

The one sure way to eliminate any smoke odor in your car once and for all is by using an ozone generator.

All the steps we went through to detail your car must still be carried out before using this machine. It actually generates ozone–O3 in chemical terms–three atoms of oxygen.

The ozone destroys any bacteria that cause smells, and eliminates them for good.

If you decide to use one of these, here are the basics of how to use it:

The only negative to using an ozone generator is that it is more costly than cleaning products, whether you’re going the natural remedies route, or opt for chemical products instead.

On the positive side, though, it is certain to eliminate any smells permanently. Out of all three different methods, it’s the best method to use if you’re looking for a long term fix.

Check out this video if you want to see one in action:

Tips on How to Prevent Smoke Smell in Your Car

By now, you’ve probably realized that getting the smell of smoke permanently out of your car is hard work!

It can be done, but it’s serious business, and not everyone has the time or energy to be doing stuff like that.

If you are a smoker yourself, we really urge you to reconsider getting all the necessary help you need to kick this habit – in case you’ve tried to do that before but haven’t succeeded.

If you’re adamant on not getting rid of this bad habit anytime soon, though, then here are a few tips to make it easier for you to enjoy this guilty pleasure and avoid (as much as possible) stinking up your car in the process.

Note that none of these prevention tips will avoid the potentially dangerous effects of third-hand smoke. Only eliminating the smoke smell for good will make your car a safe place for people and pets.

Smoking an occasional cigarette in your car while driving, windows down, will not stink up your car terribly.

If it’s a daily habit though, one that you’re indulging in regularly over time, then your car will become a source of third-hand smoke.

This means that it’s not only smelly, but is also hazardous to the health of anyone in it.

However, all is not lost! Even if stale smoke smells are tough to get rid of, it’s not impossible to do so. This just means that there’s more work and effort involved.

Whether you choose natural DIY remedies or chemical cleaning products, we’ve walked you through each essential step you need to take to succeed with all possible methods.

For the more demanding cases, using an ozone generator machine is probably going to be the best solution.

With the right products and a little bit of elbow grease, your car’s interior will be smelling all good again real soon!

How to Fix Cigarette Burns in Cars: Step by Step Guide & Prevention Tips

How to Fix Cracked Tires – And How to Know if They Need Replacing?

How To Clean Leather Car Seats – Homemade and Commercial Solutions