What's the difference between 10w-30 and 10w-40 motor oil? Find out what the difference is, which oil to pick, which type has a higher viscosity rating, and under what circumstances you can use each oil type. 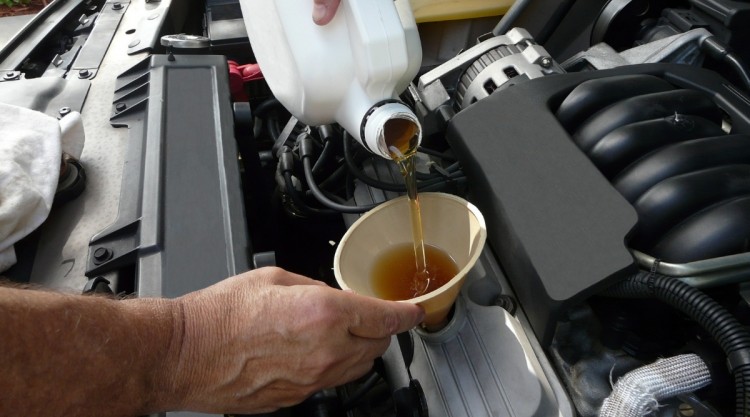 Motor oil, like so many other products we all use today, has come so far from what it used to be in terms of technological advancement.

Nowadays, there are a dizzying array of products, types, styles, weights, and formulations of motor oil to choose from, that it can be difficult to know exactly what each one is intended for and what exactly it’s supposed to do.

Some of the confusion lies in how oil is classified by its viscosity, i.e the number designation assigned to each type that can be seen on the bottle. Even the type recommended by your vehicle’s owner’s manual may leave you wondering exactly what all the information is for.

Well, that’s what we’re here for! We’re here to help eliminate some of that confusion and explain what all of those numbers mean. More specifically, this article will be talking about all the differences between 10W-30 and 10W-40 oil you should know about.

What Do All These Numbers Mean?

Each motor oil is assigned a grade. This grade is based off of how the product acts during cold temperatures versus warm temperatures.

Cold temperatures change the way oil flows. More specifically, cold temperatures tend to harden it and cause it to solidify, becoming gummy as it gets colder. On the other hand, it thins out and becomes runnier as the temperature warms.

The numbers printed on each batch of oil are directly related to this. They’re there to measure viscosity.

Years ago, back when oil wasn’t anywhere near as complicated and advanced as it is today, most vehicle engines ran on single grade options.

Today, it’s a whole other ballgame. Nowadays, we have the luxury of having multi-grade oil at our disposal, which serves multiple purposes for the engines of our vehicles.

What’s The Difference Between Single Grade And Multi-Grade?

Single grade doesn’t do anything different than multi-grade in terms of lubricating an engine. The difference lies in how it handles cold and hot temperatures.

On the other hand, multi-grade actually resists thinning and thickening, depending on its grade. Its properties and makeup allow it to “change” and act almost like two different motor oils with different levels of viscosity at both high and low temperatures.

The Society of Automotive Engineers has devised a scale consisting of up to three number and letter designations for each engine oil’s grade.

Single grade products will only have a single number designation such as SAE 20 or SAE 30. A multi-grade product such as SAE 10W30 or SAE 10W40 can be broken down into three separate sections.

What Does The First Number “10” Mean?

10 is the cold weather viscosity rating for 10W30.

This number represents an oil’s ability to maintain its resistance to hardening and thickening at 0 degrees Celsius.

The lower the number, the thinner the oil. Therefore, a product with a 0 or 5 cold weather rating will be thinner and will flow more easily than a 10 or 20 rated one.

What Does The Letter “W” Mean?

The letter “W” following the 10 stands for “winter”, and it’s simply there to let you know that the first number is the cold temperature viscosity rating.

In single grade, this last number is the only grade designation an oil receives. It is important to note that oils like SAE 30 and 40 may have been used in the past, but almost all modern engines today use multi-grade.

Viscosity is the measure of an oil’s resistance to flow. In other words, it’s the natural thickening and thinning of any fluid as it responds to the external temperature that we’ve been talking about so far throughout this article.

The rise of synthetic oils in the place of its conventional counterpart has allowed us the option to pick and choose almost any combination of cold viscosity grade and warm viscosity grade that we prefer.

10W-30 and 10W-40 oils are both among the most common grades used in many regular vehicles today.

Which one is used in your vehicle could depend on many factors, though. Since both 10W-30 and 10W-40 have the same cold weather grade, the higher temperature rating is going to be the most important difference when comparing the two.

10W-30 will have a lower viscosity at operating temperatures than 10W-40. A thinner oil at high temperatures has many benefits over one that will retain its thickness under the same circumstances.

Because 10W-30 is thinner than 10W-40 at operating temperature, it allows the components of your engine to work less and move more effortlessly. This causes less fuel to be used as thinner means there’s less friction to work against.

However, you probably shouldn’t use 10W-30 only for the sole purpose of increasing your vehicle’s fuel efficiency.

10W-30 isn’t any different at starting temperatures than 10W-40 – but at operating temperature, the environment isn’t going to have as profound an affect as if it were hot outside the vehicle.

In other words, if it’s 90 degrees outside, the temperature of your engine is already going to run at higher temperatures because of the ambient heat and subsequent absorption of the heat by your vehicle’s metal.

If it’s cold outside, those factors won’t have any effect on the operating temperature of the vehicle, and the oil in your engine must be able to resist the cold and flow easily to all the components under the hood.

Even though this is not always the case, most everyday family vehicles won’t operate at as high of a temperature as some performance vehicles which are turbocharged or finely tuned for specific types of racing.

This eliminates the need to have a thicker oil which is harder to push through the engine of most normal vehicles.

In fact, a thicker option used in a vehicle with a relatively low operating temperature may excessively wear some components by making them work harder to pump and move oil around the engine.

Back when single grade was the only option available, many vehicles used a lower viscosity oil during colder months and switched to a higher viscosity one during the warmer months to compensate for temperature fluctuation.

Today, with multi-grade options available, the need to change oil based on seasonal changes has all but been eliminated.

10W-30 is a good middle-of-the-road option for both hot and cold weather as it retains enough of the appropriate viscosity levels at both low and high temperatures.

Thin oil and heat don’t go well together, to say the least.

Thicker oil is able to better lubricate an engine at higher temperatures, as it has a propensity to stick to components.

Even though thinner can often mean decrease running costs, it will also exacerbate excess heat formed by the friction of rubbing components, which could end up causing excessive wear and engine damage.

Age isn’t kind to most things, including engines.

Wear and tear will loosen, machine away, and even chip components within a vehicle. As these components become worn, a thicker option will ensure that larger gaps and worn components will stay lubricated.

More Suitable For Vehicles Which Operate at Higher Temperatures

Vehicles that are turbocharged, tuned, or otherwise have special components often run at higher operating temperatures than their regular counterparts.

For technicians and hobbyists that build and tune engines, bearing clearances are important.

That being said, vehicles with loose clearances will require a thicker oil at operating temperature than those with tight clearances.

This is similar to the concept of older vehicles having more wear and tear on the engine components than newer vehicles whose components are well-fitted and not yet broken in.

What Other Information Should I Know Pertaining To 10W30 VS. 10W40?

First things first, always read your owner’s manual to understand what type of oil grade your vehicle’s engine requires. Some vehicles will allow “wiggle room” to include a range of oil grades, but deviating from this and deciding to do your own thing may result in damage to your engine.

If you’re the type of person who changes your vehicle’s oil yourself or if you just take your vehicle down to the local shop to have its oil changed, you have to know what you need.

Often, taking your vehicle to anybody but a dealership will result in you choosing the oil you want. If you don’t know what you need, you may end up choosing the wrong kind.

If you have an older vehicle, you may need a conventional single grade oil. Even if that vehicle requires SAE 30 or SAE 40, just remember that conventional options of the past weren’t as technologically advanced as the options available today, and the difference between the two could be much greater than the current 10W-30 and 10-W40 offerings.

The differences between 10W-30 and 10W-40 may not be as great as they used to be back when single-grade oil was all that used to be available, but there still are differences.

Understanding the SAE’s grading system and viscosity is the first step to knowing how and when to use each oil.

You see, it’s not like one is inherently better than the other. Both have their own benefits, but all of these grading systems, numbers, and letters can still be confusing if you don’t know what it is you’re looking at.

The easiest way to learn exactly what you need is to consult your vehicle’s owner’s manual.

But, if you do that and you’re still a little confused, you can always ask your local mechanic to give you a full explanation on the differences and benefits of both 10W-30 and 10W-40 motor oil. Hopefully, though, you won’t have to do that because our guide will have cleared everything up for you!

I've had a passion for cars since 8 years old, and been a subscriber to Auto Week magazine since my 10th birthday.

Ever since I turned old enough to drive, I have driven as many vehicles as possible, while teaching myself how to perform maintenance and upgrade work on every vehicle I've owned.

For the past 10 years, I've been honing my skills as a vehicle hobbyist, in recent years also enjoying writing car reviews, opinion articles, vehicle how-tos, car-buying guides, and even provide individual consultations for those who need car-buying advice.

In addition to writing for Vehicle Scene, I currently write for Autolist, and also own and operate my own vehicle blog website, The Unlimited Driver.

Best Car Scratch Removers In 2020: Easy Do It Yourself Fixing!

How Much Does an Oil Change Cost: Knowing How Much to Pay

Car Burning Oil: Why This Happens & What to Do About It

Does Motor Oil Expire? How Long Does It Last? (Facts VS Myths)