How to Dispose of Antifreeze Properly, Respecting the Environment!

Antifreeze is toxic to us, pets and wildlife, so you cannot simply pour or throw it away when you want to dispose of it. Therefore, we thought we'd write this guide on how to dispose of antifreeze properly, lawfully, and in an environmentally friendly way. 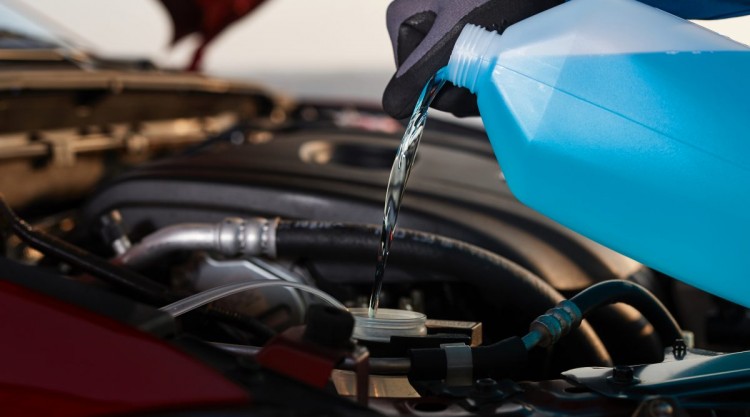 Because of how vehicles are designed, there are a variety of fluids they require. Gasoline is probably the most well-known, but brake fluid, engine oil, transmission fluid, and antifreeze are a few very important others.

All of these have become better over the years because of technological advancements. They have enabled vehicles to last longer, now allow you to go through longer periods of time before you need to change them, and even condition engine parts to prevent wear and tear.

Unfortunately, many of these fluids are also toxic, and disposing of them properly is very important for your own personal health, the safety of others, and the well-being of the environment.

Antifreeze, more commonly known these days as engine coolant, is especially toxic, particularly when it is mixed with oil or gasoline. Even the slightest drop can contaminate an entire container of used antifreeze, making it a hazardous material.

There are strict laws concerning the proper disposal of both pure antifreeze and contaminated antifreeze, and we’re here to tell you all about how to dispose of antifreeze the safe way.

It is a substance, often mixed with water, which is circulated through your vehicle’s engine to provide cooling to various components and allow your engine to start in cold conditions.

Without antifreeze, regular water would boil off during extreme heat or freeze during extreme cold, causing your engine to overheat or not run at all in cold temperatures.

Why Is It Important to Dispose of Antifreeze Properly?

Antifreeze is considered to be toxic because of its glycol additives.

Pure antifreeze can often be recycled, but when it’s mixed with any amount of oil or gasoline, it is considered to be a hazardous material and must be disposed of in a different way at a special facility.

Different jurisdictions have laws regarding the recycling and disposal of different types of toxic and hazardous materials.

Make sure you dispose of antifreeze correctly according to the local laws of the jurisdiction in which you live, as not doing so could result in steep fines (or worse).

For example, animals are often attracted to the sweet smell and taste of the glycol in many antifreezes. Ingesting it can be detrimental to both humans and animals, but it can also contaminate the ground and water supply if it leaks or is dumped inappropriately.

How Do You Dispose of Antifreeze?

Actually disposing of antifreeze is not difficult in and of itself, you really just need to know what steps to follow.

The difficulty comes with making sure it is contained and stays contained, then finding an appropriate disposal center to do all of this in.

With that being said, it really isn’t all that complicated, and we’ve put together the following list of steps for you to follow and simplify your life with.

Seal Old or Contaminated Antifreeze in a Labeled Container

Whenever you are transferring antifreeze to a container for transport, use a separate funnel for coolant than ones you use for any other fluids, especially oil and gasoline.

Even the slightest bit of any one of these other fluids can contaminate antifreeze, making it a hazardous material and complicating the disposal process.

Any antifreeze container should be immediately sealed and labeled with the type it contains, disposal date, and a warning label. If it is tainted, make sure to label the fluid appropriately.

If not being disposed of immediately after filling, the container should be stored in a place that is out of reach for children and pets.

Check to See Where Used Antifreeze Is Accepted

The internet is always a good place to search for an appropriate antifreeze disposal center.

Jurisdictions vary drastically when it comes to disposal locations and laws, but you can usually check your city website for specific information regarding locations.

Many recycling centers will accept pure antifreeze, as it can be recycled. Automotive shops can sometimes do the same with machines that will purify it for recycling.

If none of these places accept used antifreeze, your local mechanic can usually point you in the right direction as to where and how to dispose of it.

If the antifreeze is contaminated and has become a hazardous material, your local government laws and an internet search will usually show you exactly where and how to transport and dispose of it.

Transport the Antifreeze to the Appropriate Disposal Center

Once you put it inside labeled containers and a disposal center is located, you will have to transport the old antifreeze.

Make sure each container’s lid is sealed tightly. It can be helpful to tie down containers to prevent them from tilting or falling over.

You should also make sure to follow any guidelines your jurisdiction requires for transporting toxic materials.

Oftentimes, you can even find a qualified toxic material transporter who will deliver the antifreeze to the appropriate place for you. It might cost you some money, but doing this will also eliminate the possibility of an accident.

Once at the disposal location, make the handoff and request a receipt to show that all the proper guidelines were followed.

What Happens If There Is an Antifreeze Spill?

As with most fluids, a small leak or spill is inevitable, especially during the transfer process. For antifreeze, though, even the smallest spill is a big deal.

Let’s look at how you can clean up an antifreeze spill.

Equip Yourself with PPE

For an antifreeze spill, gloves are absolutely necessary, as its additives are skin irritants. A mask is always helpful, especially in enclosed areas such as a garage, but isn’t necessary in all situations.

A long sleeve shirt and goggles are helpful if the spill is large enough, but they are not necessities for small spills.

Absorbing and containing it will need to be a top priority.

Absorbent material such as kitty litter, baking soda, or sand will all do the job. Oil absorbent is better as it is more specifically designed for toxic fluids, but many will not have this readily available.

Oil-Dri, as it is often called, can be purchased at most automotive shops or large retail stores.

Cover the Spill Area and Absorbent Material in Paper Towels

After you have applied the absorbent material over the spill, lay down paper towels over the affected area.

This will allow both the antifreeze and absorbent material to be absorbed and removed from the floor or ground.

To allow appropriate levels of absorption, allow the paper towels to rest for a minimum of one hour and a maximum of three hours.

If let alone for too long, the paper towels may become saturated, allowing toxic fumes to penetrate the absorbing materials and get into the air.

Once the appropriate time has elapsed, use another layer of dry paper towels to pick up the saturated paper towels, and place them in a plastic garbage bag.

Use Hand Soap, Dish Detergent, or Laundry Detergent to Cover the Spill Area, and Scrub It with a Shower Brush

After all materials and paper towels are removed from the floor or ground, apply soap to the spill area and scrub the area with a bathtub cleaning brush.

Doing this will remove any residue, stains, or lingering odors caused by the spill.

Depending on the extent of the spill, the scrubbing could take several minutes to several hours.

Rinse and Dry the Area with Water and Paper Towels

After scrubbing the area for as long as necessary, rinse the area with water and layer it again with paper towels to dry.

Vent the Area by Opening Any Windows or Doors

If the spill occurred in your garage, shed, or other indoor area, it is a good idea to open doors and windows to vent any fumes that may be produced.

Washing your hands after cleaning up an antifreeze spill is probably the most important thing you can do for yourself and your own safety.

Exposing your skin to small amounts of Ethylene Glycol most likely won’t be detrimental to your health, but larger amounts from exposure or ingestion can cause serious health hazards.

Why risk dealing with any of that if you can easily avoid it all?

It is a good idea to wash your hands after performing just about any maintenance on your vehicle, but this is especially the case with antifreeze.

You can also choose to wash your hands at any time during the transportation and disposal process.

Are There Any Other Tips I Should Know About?

First things first, you should know that not all antifreeze is the same.

Most might be made of Ethylene or Propylene Glycol, but different antifreeze from different manufacturers are made with different ingredients, all of which should be noted when disposing of it.

We go into more details about all of this in our guide about the best antifreeze available on the market today, so be sure to give that a read for more information.

Also, always remember to put a label on the container in which you are transporting used antifreeze, especially when it has been tainted.

Last but not least, gloves can be very important during the entire disposal process. Just like germs spread through contact, a small leak or spill can go a long way and get on containers, clothes, and other items.

Don’t be afraid to use several pairs of rubber gloves throughout the disposal process if you wish.

Eventually, the fluids in your vehicle will need to be replaced and properly disposed of.

Antifreeze is one that is especially important to dispose of correctly, or else you’ll be putting your own safety, that of everyone around you and the environment’s well being at risk.

Depending on where you live, how and where you can take your antifreeze to be recycled might differ from one place to another.

Each jurisdiction has laws governing exactly what happens with used fluids, so they don’t pose an environmental or health risk.

Knowing who to ask, where to go, and exactly how to dispose of your used antifreeze correctly will not only save you from getting fined, but it could also prevent you from potential health hazards.

If you are still shaky on the idea of proper antifreeze disposal, just ask your trusted local mechanic about it, and they’ll guide you on anything you’re still not too clear about.

Most of the time, they can (and will) point you in the right direction to safely dispose of your antifreeze.

I've had a passion for cars since 8 years old, and been a subscriber to Auto Week magazine since my 10th birthday.

Ever since I turned old enough to drive, I have driven as many vehicles as possible, while teaching myself how to perform maintenance and upgrade work on every vehicle I've owned.

For the past 10 years, I've been honing my skills as a vehicle hobbyist, in recent years also enjoying writing car reviews, opinion articles, vehicle how-tos, car-buying guides, and even provide individual consultations for those who need car-buying advice.

In addition to writing for Vehicle Scene, I currently write for Autolist, and also own and operate my own vehicle blog website, The Unlimited Driver.

Antifreeze Vs Coolant – What is the Difference Between Them?

Water Leaking into Your Car? – The Causes and How to Fix It!