How Long Can You Drive on a Spare Tire? Keeping it Safe

Did you recently toss a spare on your car after getting a flat tire? Curious to find out how long you can actually drive on it before having to head to the tire store and put on a brand new tire? Find out what you can expect! 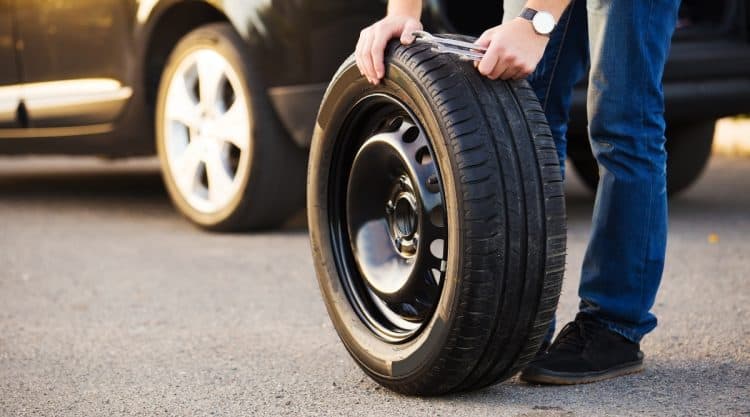 The potentially devastating cost of repairs is something all car owners are familiar with (and try to avoid by any means necessary – even if we know it’s not exactly the best thing to be doing to our cars at that time.)

It’s all too easy to allow a temporary solution to become permanent with time.

This can be acceptable in a few scenarios. Let’s say you’re using a stop-leak product to seal up a small breach in your oil or coolant system. In such a case, there’s usually no need for further action as long as the leak doesn’t return.

On the other hand, there are circumstances where real action has to be taken quickly, and temporary fixed just won’t cut it.

A prime example of this is when you’re rolling on a spare tire. Realistically, not everyone has the money for a replacement if the old unit is irreparably damaged.

So, how long can you drive on a spare tire? What factors influence its lifespan? What can happen if you don’t replace it? We cover all of these questions in this article – so read on!

How Long Is It Safe to Drive on a Spare Tire?

By definition, a spare tire is built to be temporary—that’s why it’s called a spare. You’re supposed to use it in the event of an emergency.

The owner’s manual for your vehicle will tell you how long you should be driving on it.

However, the amount of mileage you can use it for and stay safe with while on the road can vary, as we’ll explain shortly.

For now, though, know that the general rule is to replace it as soon as you can.

What Factors Can Prolong or Shorten How Long You Can Keep Driving on a Spare Tire?

The factors that can shorten or extend a spare tire’s lifespan are:

There are three varieties: full-sized, donut (space-saver) and run-flat. The type you have can make a big difference in how long you can keep driving on it:

Full-sized units are a match for the tires you already have. As long as it’s in good condition, it can serve as a replacement.

Most vehicles no longer have full-sized units included these days, though. Many manufacturers decided that the expense of providing an extra tire that will sit in the trunk indefinitely is too high.

These are designed to be compact; lighter and smaller in size than a standard or full-sized unit. They can support your vehicle for a short time, but not indefinitely.

You shouldn’t go for more than 50 miles with one of these on your vehicle. It’s also crucial to avoid speeds over 50 miles per hour.

These models are more resilient against common road hazards. If punctured, rather than going flat or blowing out, they’ll still run.

(On that note, just in case you ever find yourself in such a situation, read this article to learn what to do when driving on a flat tire).

Now, you’ll still need to have the affected unit repaired or replaced as soon as you get a chance to do so. You just won’t have to go through the hassle of changing it—you can keep driving on it.

The manufacturer will tell you how long you can keep driving after a puncture.

This applies mostly to full-sized and donut styles. What does the rubber look like? Does it appear visibly worn; are there cracks?

Tires don’t miraculously stop aging, even if they haven’t been used. Heat and oxygen will contribute to deterioration. Your trunk isn’t airtight, and it can get sweltering during the summer months.

Inflation – Is It Full?

Under-inflation is one of the factors that increase the risk of an accident. Any unit will perform poorly if it isn’t inflated properly.

Driving on unstable terrain when the unit is already vulnerable will shorten its lifespan. Think unpaved roads or streets that are pockmarked with potholes and cracks.

If your daily drive involves traveling over this sort of ground, expect to have to replace your spare sooner.

Slow and steady is the way to go with these temporary components. Try to avoid hard stops, abrupt turns or speeding.

This means driving below 50 miles an hour—no highways!

What Could Happen if You Drive for Too Long on a Spare Tire?

Not only is it not safe to drive for a longer period of time than a spare tire can handle, but you can also end up causing severe damage to your car.

Persistently driving on a spare tire can get you into an accident.

Remember, these units won’t last forever: it’s only a matter of time after a certain number of miles.

The differential in your vehicle compensates for each unit rotating at slightly different speeds. This is assuming both wheels are nearly identical.

Donut or space-saver models can wear the differential down over time. The smaller size will put extra strain on the component.

Now that all is said and done and you know how long you can you drive on a spare tire, you should be able to stay out of harm’s way?

In short, the answer to this question may disappoint you, since it’s along the lines of: as short a distance as you can manage.

The next time you even think about abusing a spare tire beyond what it’s capable of handling, keep in mind that the cost of a new tire isn’t cheap, particularly for certain vehicles.

It’s still preferable to pay these fees rather than get into an accident or damage your differential, though. So, if you have absolutely no other choice but to continue driving on your spare tire, there’s not much else that you can do!

Your car won’t handle well if one wheel is compromised. Instead, it needs all four units to be in tip-top shape. Use the spare to get home or to a mechanic’s, and then put it to rest.

Driving on a Flat Tire: Everything You Need to Do to Stay Safe!