Trying to figure out if it's time to change the fuel filter on your car or truck? Find out all you need to know about fuel filters going bad, what the symptoms are, and when it's time to get them changed. 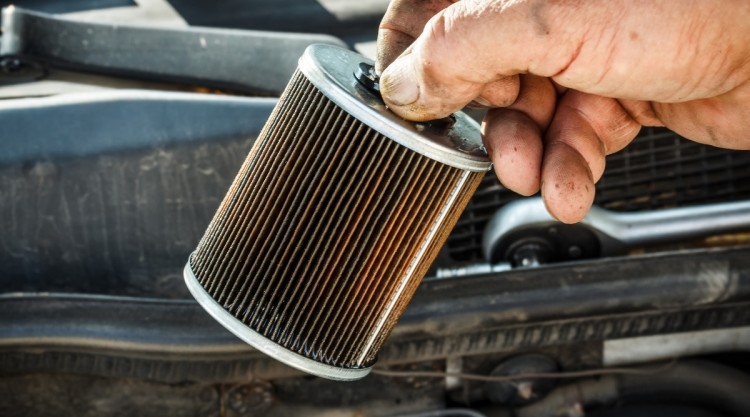 Knowing how to identify potential issues with your car is essential.

There are some things that can be safely ignored (only for a while), and others that simply cannot (and should not) be ignored for one moment.

It isn’t necessary to understand how to repair every little problem your car ever faces, though. After all, that’s what your mechanic is for. If we all knew how to solve car problems all on our own, mechanics would be out of business in no time.

Safety isn’t the only concern, either. Neglecting to fix certain issues can prove to be a very expensive mistake in the long run.

If vital components in your vehicle are damaged, you might end up paying thousands of dollars – way more than solving the problem you initially had (and ignored) would have cost you in the first place.

So, you can save yourself a whole lot of trouble and heartache by knowing warning signs of common car problems.

In this article, we’ll be talking about all the possible symptoms of a bad fuel filter.

We’ve provided in-depth descriptions of each of these symptoms, so you know exactly what the warning signs are and what you need to pay attention to the most.

You’ll also learn why it’s a terrible idea to dismiss them and choose to address them later “when you have time”. A bad or failing fuel filter can cause huge problems really quickly.

What Does Your Fuel Filter Do?

The name is self-explanatory: a fuel filter filters the fuel supply in your car.

Such filters aren’t only found in cars, though; they’re used in almost any engine or system that runs off gasoline or diesel.

From cars to planes and small equipment, they’re part of the standard build of fuel-driven equipment. They do exactly the same job an oil filter does, except with gasoline or diesel.

The sole job of a car’s fuel filter is to separate harmful contaminants from the fluid.

Large-particle debris can also get caught in the filtration material, preventing clogs from occurring inside sensitive mechanisms. This can cause further damage to the vehicle or equipment.

Unfortunately, this material is not self-sustaining. When it eventually becomes saturated, the entire unit will need to be disposed of.

A regular preventative maintenance schedule counters this by stopping your fuel filter from getting to this stage.

In this section, we’ll go over the symptoms that could show that your filtration unit has turned bad, and it’s time to consider replacing the filter.

Bear in mind, though, that many of these signs can be attributed to other issues.

So, just because you see any of these signs come up, this doesn’t necessarily mean that your fuel filter now needs a replacement. Check your filter first to make sure it’s not a signal of something else first before you pinpoint it as a problem with your fuel filter.

Most of the other culprits are more serious than an old filtration unit. Before you suspect a blown head gasket or a leaky radiator, inspect your filter.

After you make sure that it’s indeed a problem with it, it’s relatively inexpensive and easy to replace the fuel filter when compared to some of the other working parts of an engine or system.

Here are the most common signs to be aware of:

Let’s explore each of these in turn; this might help you determine whether your fuel filter is bad and needs replacing, or something else is going on that you need to address instead.

The mixture of air and fuel in internal combustion engines needs to flow smoothly. If the fluid has to pass through clogging fuel filter material, the mass air flow and fuel flow are restricted.

As a result, this causes the engine to not start on the first try; if it even starts at all.

If you’re consistently dealing with hard starts, a bad filter may be the cause.

For cars that just won’t start, don’t forget to start with the obvious things first. Take a look at the battery first; then the filtration unit, and so on.

It’s always a good idea to check the filter rather than assuming it’s something more complicated or expensive. Avoid unnecessary costs from a mechanic where possible.

A random engine misfire could be caused by insufficient amounts of fuel reaching the injectors, or injectors that have become jammed with contaminants from the dirty fluid.

In older vehicles, this can happen while you’re idling, as well as when you’re in motion.

Newer cars are less likely to suffer misfires while idling due to clogged fuel, so if your new car is misfiring, there’s a high chance it’s not the fuel filter causing this, although it’s still a possibility you can’t completely rule out just yet.

Noisy or rough idling isn’t normal. Consider the age of your filtration unit if this symptom ever crops up.

While this symptom doesn’t necessarily mean that something is seriously wrong, it is a common warning sign that the fuel filter needs cleaning or replacing.

When you hit the accelerator pedal, your engine will demand more energy. If the liquid power source can’t get to the injectors, you may start to lag.

It’s expected that fuel injection occurs instantly. A delay in this acceleration or a car struggling to accelerate uphill is thus a sign that the fuel filter needs some attention.

This can also occur in more challenging driving conditions such as cold weather or if you’re driving off-road.

You probably won’t find a light or diagnostic feature in your car indicating a bad filter.

The dreaded “check engine” light might switch on, though.

The appearance of the engine light could indicate a number of problems, of which are ones related to your fuel filter.

Again, we suggest checking for minor, repairable issues first. If you’ve experienced other symptoms on this list, inspect the filtration unit.

Forcing liquid through saturated filtration material is tough on the pump. You may be able to hear it whining as it works.

Have someone rev your engine while the car is parked and listen to it. Most pumps are located inside the gas tank.

The injectors influence how much fuel your engine consumes. Without a functional filtration unit, they can get dirty.

Sediment or buildup can impact how the injectors function. They can become erratic, injecting excess gasoline or diesel unnecessarily.

Plus, cylinder misfires, engine stalls, and trouble starting up are all taxing on your engine. The harder the motor has to work, the thirstier it will be.

You’ll save yourself money in the long-term by checking the fuel filter to see if it needs repairs or a replacement.

What If You Ignore the Symptoms and Don’t Change Your Fuel Filter?

Ignore the above warning signs at your own risk. (In other words, we strongly advise you NOT to ignore them!)

If you insist on pretending nothing is happening, or procrastinating addressing these problems over and over again, at least be aware of the repercussions.

It’s easier to ignore them than it is to investigate, but it’s definitely not a safer or more cost-effective route to take.

Here are some of the consequences you’ll most likely face when ignoring bad fuel filter symptoms:

We’ve established that engine performance issues can arise in all sorts of ways, such as lack of engine power.

An engine or its systems that are not functioning as they should can be highly dangerous to you, your passengers and other road users.

An erratic engine can throw off even the most experienced driver, and there’s not much you can do when that happens.

Not being able to accelerate when in an overtaking position can cause danger to other vehicles, and unnecessary braking.

A faulty fuel filter means you may get less gas per mile than you used to.

Filling the tank up more often can hit your wallet hard over enough time.

Unfiltered fluid passing into the system can damage individual components. Debris from the gas tank, corrosive compounds and moisture are just a few examples.

The injectors and larger parts, such as your cylinders, might end up jammed. This is a lot more difficult to treat than replacing a bad filter, and is much more expensive.

How Often Should You Change the Fuel Filter?

How quickly the unit wears out is largely based on the make and model of your vehicle. Older and antique cars will need more frequent replacements than modern models.

Check the owner’s manual for this information to get the most accurate answer, though.

You can also request a fuel pressure test from your mechanic if you want to be certain. This simple examination will determine if there’s less pressure than your car is rated for. If so, your mechanic may have to check the filter itself.

You now have a comprehensive list of some of the most common symptoms of a bad fuel filter that needs replacing.

Even if you’ve only noticed one of them in your vehicle, it’s always better to investigate and get to the bottom of the situation than it is to ignore it.

For those of you who happen to be less car-savvy, you may prefer to adopt the wait-and-see approach. This might save you money in the short-term, but isn’t a permanent solution.

There are serious consequences to forcing your car to run in a sub-optimal condition, and having your car operate with a bad fuel filter is certainly not an exception.

Even if it’s just that your vehicle’s fuel filter is clogged, it’s best that you address it as soon as possible, and that you do not put it off for later.

The price you might end up having to pay for one of these units is far less than fixing engine damage, so ensure your car is running in optimal conditions at all times!

Car Smells Like Gas: Why It Happens & What To Do About It